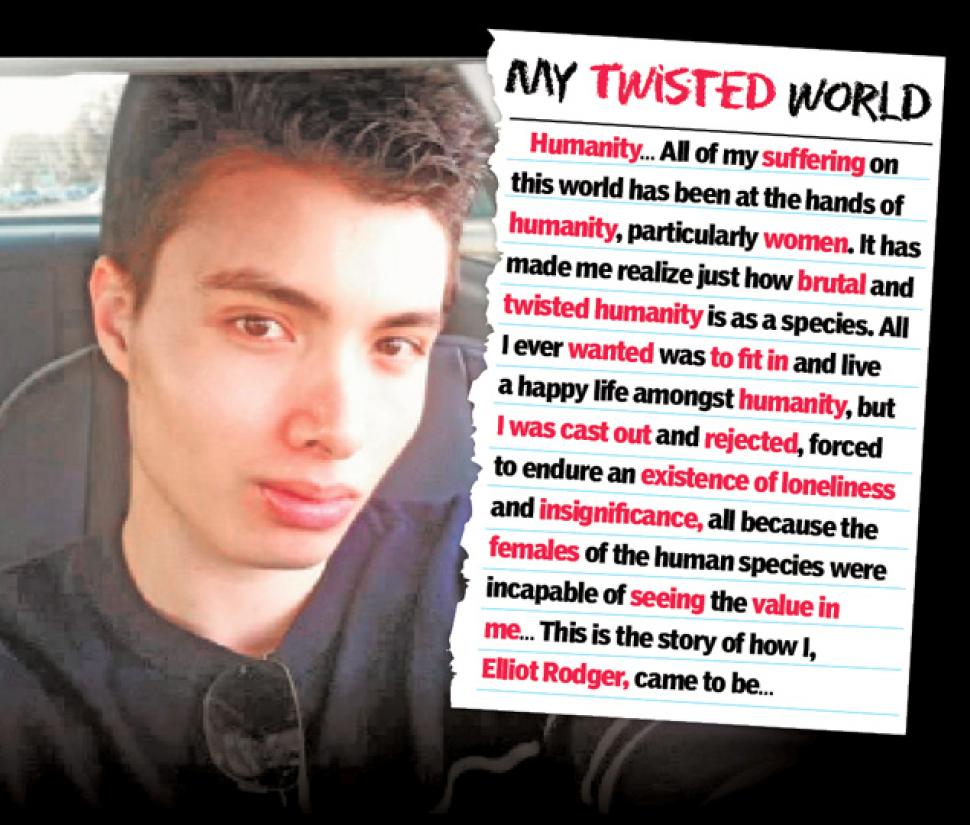 Elliot Rodger, a 22 year-old male that attended Santa Barbara City College, murdered six people and wounded thirteen others shortly after releasing an extremely disturbing video explaining his plan and reasoning, along with an even more disturbing manifesto.

I made the grave mistake of reading that manifesto, as did countless others. In this sick 107,000 word manifesto entitled “My Twisted World”, he describes every detail of what seems to be a broken, sad life in which he was bullied and tormented. Rodger makes himself out to be just a kind young boy, if not a little awkward, who was picked on for being what he saw as “different” – to him, different meant shy, quiet, and of a mixed race.

He also discusses his difficulties with women, and, omitting the disgustingly misogynistic rants throughout the manifesto as well as the video he released shortly before the killings took place, talks about how at age 22, he is still a virgin, and has never kissed or even held hands with a girl.

Rodger briefly discusses what seems to be a mental health issue that has plagued him for his entire life. He talks about seeing various therapists, who, according to him, give him the “wrong advice;” psychologists and psychiatrists who give him the “wrong medication” that he ends up refusing to take; he even gets various mentors and counselors who attempt to aid him in the area of dating and “picking up women.” Despite the various attempts to help him, he still ended up girlfriend-less, friendless, sad, lonely, and entirely alone.

Now, I am not here to dismiss the fact that Elliot Rodger had serious mental health issues. From the beginning of his manifesto and from the first word he speaks in his “Retribution” video, it is very apparent that this person is deeply disturbed and in desperate need of help from someone.

However, I am here to disprove the idea that this happened because he was bullied, depressed, or any other label the media attempted to pin on him to excuse his behavior.

Was Elliot Rodger bullied? Probably. The magnitude of the bullying, however, was most likely exaggerated and amplified in his mind, because the theme of his manifesto is one giant pity party in an attempt to explain and excuse his behavior.

Bullying is awful, painful, and can mentally and emotionally scar a victim for the rest of their lives. I was bullied up until my junior year of high school, and the mean things that kids my age said or did to me will forever be a vivid memory. Many children are bullied, especially those who are “different” from the other kids, as Elliot Rodger believed he was.

Here’s the difference – I now embrace my uniqueness. Sure, as an awkward elementary school child who is just learning how to read and write, it can be extremely difficult to feel like an outcast. Many children try to change themselves to fit the mold, as Rodger did; they will do things such as change their hair, buy different clothes, or attempt to pick up hobbies or activities that the other kids find “cool.” This is normal for young children because they don’t know how beautiful individuality really is. I dressed like a tomboy, didn’t wear makeup, had some acne, played with boys, made friends with the other misfits, was very smart and outspoken, and I wasn’t rich by any means; these things made me an obvious target for the “popular” girls and boys at school. I even got made fun of for having dirty blonde hair instead of the bright blonde that they were sporting! I, like Rodger, would come home from school and cry because I felt like I didn’t fit in and never would. I felt like my worth rested within the palms of those girls and boys. Boys didn’t like me, either! Rodger and I had this in common – however, our difference lies in the fact that I learned to embrace my uniqueness instead of try to get revenge for it.

Today, I am going to an incredible school, I have goals and dreams, I have ambition, and I have the means to get to where I want to be. There is a way to turn bullying around and make something positive of it. Individuality is such a blessing, and so many people are too caught up in wanting to be like everyone else to recognize it.

When I would call my grandmother and cry about being made fun of for being “different,” she would ask me, “If you try to be like someone else, then who will be you?”

Each person is unique, and each person is beautiful, no matter what someone said to you when you were twelve years old. That being said, taking the words of that twelve year old and turning them into the power in your finger as you pull the trigger and end an innocent life in unacceptable. Elliot Rodger did not commit these heinous acts because he was “different” – he committed them because he was a misogynistic psychopath who felt the world owed him something.

Elliot Rodger seemingly suffered from depression, anxiety, low self-esteem, and A.D.D. As someone who suffers from the former three mental health issues, I know how daunting they can be. It can be extremely difficult to ask for help, and even more difficult to accept treatment for them. It can often bring up more feelings of being “different”, which is often what people with these obstacles are trying to avoid by hiding from them. The fact is, having a mental health issue does not make you “different” or less worthy! In fact, a study in 2012 showed that 18.6% of American adults suffer from some form of mental illness, and 46.3% of children aged 13-18 suffer from a form of mental illness, with almost half of those children being diagnosed as “severely mentally ill.” If you have any form of mental health issue, I cannot stress this enough: YOU ARE NOT ALONE. You are not unworthy, you are not hopeless, and most of all, nothing is wrong with you.

Having these issues does not mean you are at risk of committing crimes like Rodger did.

it means that something in your brain causes you to have these issues, but they can be overcome with therapy, medication, and various activities such as yoga, art, etc. The only thing you must do is ask for help, and accept it. Elliot Rodger was offered the help he needed, but he refused to accept it and be proactive in his own mental health. There is absolutely nothing wrong with asking for and accepting help – in fact, I absolutely encourage it. Speaking from experience, it can be the most positively life-changing thing you can do. If you just take that first big leap off of the edge, you will create a support system that will carry you through the rest.
What Elliot Rodger did will forever be in our hearts as a tragedy; he himself was not a tragedy. He is not the face of those with mental illnesses; he is not the poster boy for those who are “different.”

He does not represent me or anyone else who has mental health obstacles to overcome.

I am unique, I am different, I have mental health issues, and I am proud of myself, as everyone like me should be.