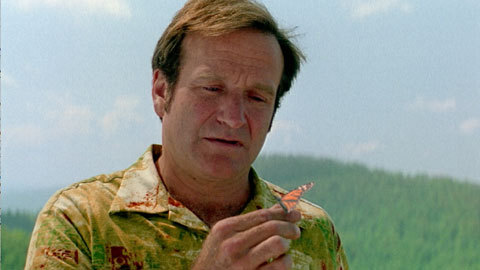 “Nope. He was totally murdered.”

“If the funniest, nicest, dad-like actor committed suicide, will I lose my battle too?”

Those were the thoughts that buzzed through my brain when I heard Robin Williams died from suicide. On social media, the world buzzed with me.

“When I’m in a bad depression I think of those who are fighting right along with me. One of my favorite fighters is now gone.”

“I have my mom telling me not to tell people I have bipolar disorder.”

According to The Washington Post, the comments above were some of the sentiments posted on social media channels run by health advocacy groups after Robin Williams passed.

Robin Williams committed suicide at age 63 on August 11th, 2014 after battling alcoholism, depression, and the beginnings of Parkinson’s disease. Alcoholism can lead to depression or can be used as a coping mechanism for depression. Also, the first stages of Parkinson’s disease often is depression because the disease alters the chemicals in the brain. So basically, he was hit by a train wagon of overwhelming darkness.

He did try to help himself. For his alcoholism, he checked into rehab in 2006, and again in July of 2014. Plus, he was going to therapy for his depression.

His death is a wake up call – there has to be a better way to treat depression.

Talking about “it” is proven to help? And “it” should be accepted by society?

Since his death, millions of people started speaking up (even if their moms said to keep it a secret), asking for help or offering help online the night he died. The stats below are from The Washington Post.

These open discussions are a great start to recovery and relief for those with mental obstacles, according to research. A 2012 study published in the journal World Psychiatry proved that support from a friend or family member who acts as a caring and listening role model can increases self-care, hope, control, and a feeling that you are needed in the world while, obviously, decreasing depression.

“Coming out with your own story also provides an opportunity for acceptance and support from others who face similar problems, and that interaction impacts those offering help, too,”said  Elahe Izadi of The Washington Post.

This is exactly what The Strange is Beautiful is hoping to accomplish with our instagram movement Me & My Story.

“People in general don’t share. They don’t talk to their friends and colleagues [about mental illness], they don’t share at work,” said Katrina Gay, director of communications for the National Alliance on Mental Illness.

***Side note, the struggle of talking about/dealing with a mental obstacle at work is so UGGH…definitely writing another article on that xox…***

I remember Robin Williams as the absent minded professor in “Flubber.” To be honest, the movies I’ve seen with Robin Williams have been his light-hearted children’s movies – Hook, Flubber, and Jumanji (which still freaks me out today, I mean, those drums though…)

However, I discovered a whole different, serious side to him when I researched his work after he passed. He tried to change the public’s views on mental health with his adult movies such as:

“You treat a disease, you win, you lose. You treat a person, I guarantee you, you’ll win, no matter what the outcome.”

“Our job is improving the quality of life, not just delaying death.”

(had to include some quotes from Patch Adams because it really got to the pit of my heart.)

This movie will actually be screened at the Kimmel Center in Philadelphia as part of National Suicide Prevention Week. Jason Nark of The Daily News wrote “There’s a moment in The Fisher King when Robin Williams’ character, homeless and unhinged by the death of his wife, gets close to something happy. And then a fire-wielding red knight appears on horseback, the embodiment of all his anguish, forcing him back toward the darkness of his own depression. It seems so much more than just a scene in a movie now, in light of the gifted actor’s suicide last month.”

His work has influenced millions of people to be open about their mental health, so people can feel safe asking for help, and so the world can understand those who feel alone. His death should only motivate everyone to find a better way to relieve depression.

Keep sharing your story through TSIB’s Me & My Story so that, slowly, the millions of people silently suffering can feel comfortable speaking of societies capped secret, and mental health won’t be so strange to talk about.

I wish I could offer more help for those with depression besides sharing your story, but when I look up depression treatment centers, or depression clinics etc., it’s extremely overwhelming. There’s tons of different places, and to be honest, the look of their corporate, very school/city-like sites make me feel uncomfortable. And, there’s a billion different suicide hotline numbers that also make me feel uncomfortable. So I’m not going to recommend any suicide hotlines, programs, or clinics until I’ve done my research. Will post more on depression ASAP.

What is Depression? What is Alcoholism? And how can alcohol affect depression?

How does someone become an alcoholic?